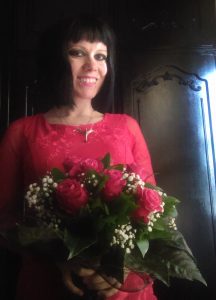 Exactly six months ago (on October 25, 2017), I successfully defended my PhD thesis titled “Monomodal and Multimodal metaphor and Metonymy in the Art of H.R. Giger” in front of the PhD committee, my professor and supervisor Mario Brdar, and my family, friends, and students at the Faculty of Humanities and Social Sciences in Osijek, Croatia. The whole thing felt appropriately surreal and magical, and unlike anything else so far in my life – this is it, the final step! My dream and what feels like a culmination of my academic interest and personal love came true. I owe eternal gratitude to my dear supervisor, professors in the committee and everyone who supported my PhD journey. In two days I’ll have my promotion and I’m pretty excited – the announcement, the throwing of hats (at least I think we’ll throw them)! I hope another two years don’t pass till my next post, though. =)

A few visual impressions from the defense and afterwards (the defense, with my supervisor, chilling with my professors and family at a nice café in Osijek – I had a smoothie, of course): 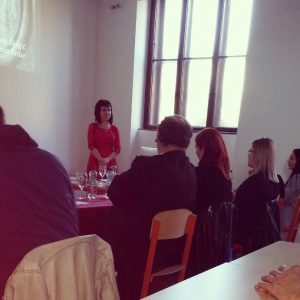 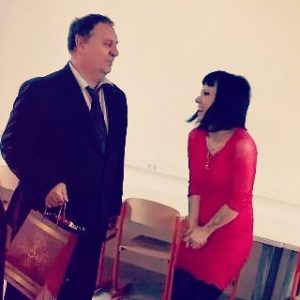 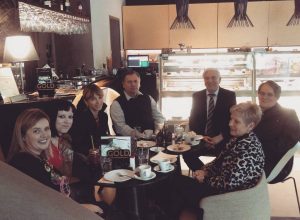 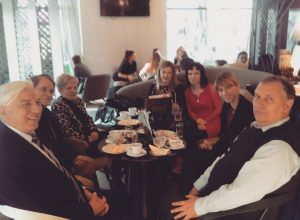 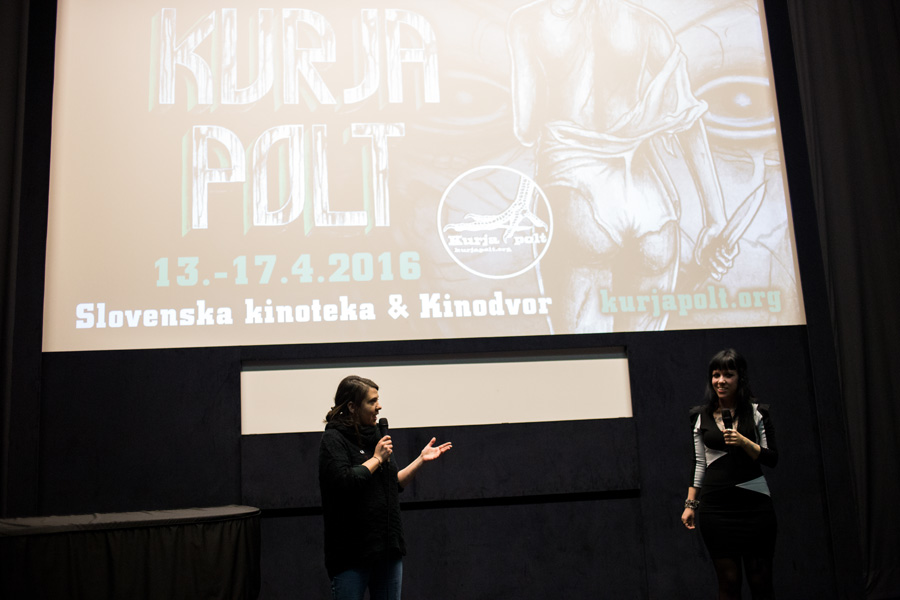 As with all the places that connect me with special people and H.R. Giger, I think I left a piece of my heart in Ljubljana. Reason to visit: Kurja Polt Genre Film Festival, where I had the utmost pleasure and honour to give a lecture on his art through a cognitive-linguistic lens, thus contributing to the homage to H.R. Giger on the second day of the festival, April 14. 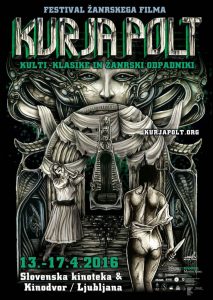 How did it all came to be? Marco Witzig, curator and Giger collector (and my dear friend who has helped me tremendously with the corpus for my PhD thesis) put me in touch with the festival organizers in order to do something regarding their homage to H.R. Giger (which included the screening of the „Dark Star“ documentary, short films and music videos). In a matter of hours and some email exchange later – it was all set: I was to present a lecture under the title „H.R. Giger Alienscapes: The Secret Language of Biomechanics“, which is derived from my research so far. Suffice to say – I couldn’t sleep that night from the excitement!
Kurja Polt festival (appropriately named „Goosebumps“ in Slovenian) is run by some of the most talented and interesting people I ever had the opportunity to meet, spearheaded by the incredible Maša Peče (pictured above with me). From the first email, to our encounter on the day of the homage, to our parting (for now), there was a great amount of energy between us – two horror film enthusiasts and art lovers – that we basically hit it off from the get-go, and I cannot wait to see this fantastic lady again. 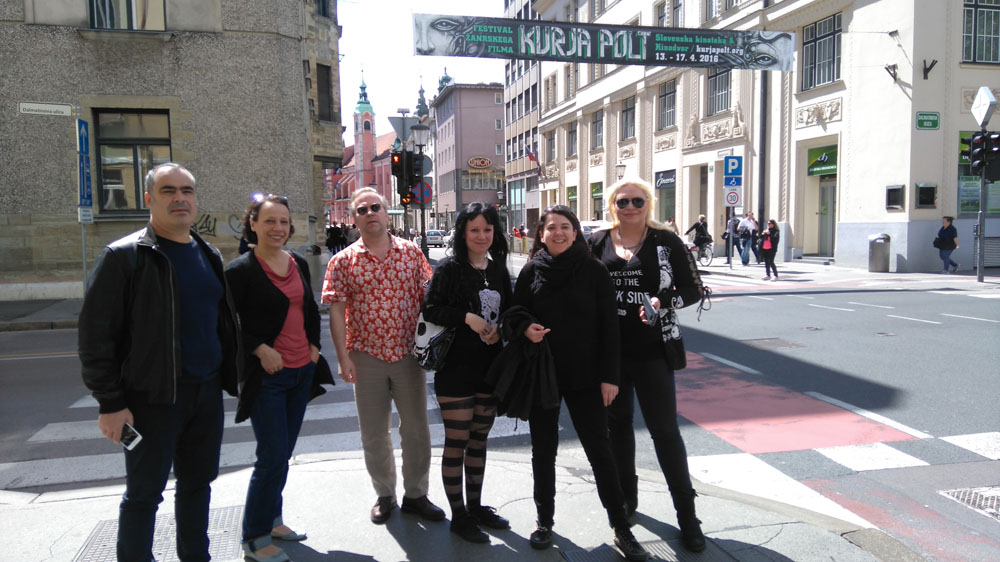 Also, the rest of the Kurja Polt gang: Neža, Nika, Ondra, Kaja, Varja, Matevž from Kraken Short Film Festival, and all the others I’ve met (their professionalism and hospitality knows no boundaries), including other festival guests (Francois, Dolly and Bernd), made this an unforgettable experience in the alluring darkness of Kinoteka and Kinodvor cinemas. 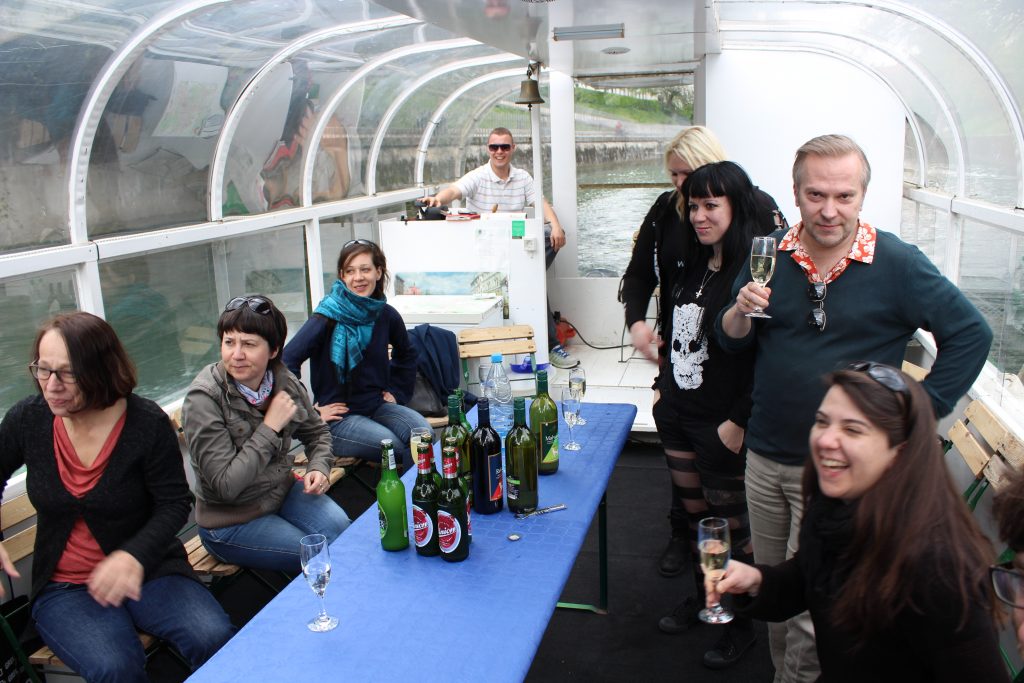 Yes, we went on a boat ride, too! Also, we were treated with great lunches, a ride with the funicular to the Ljubljana castle, along with many interesting activities in and around the venues. For example, after the screening of the Indian blockbuster „Baahubali: The Beginning“, the foyer of Kinodvor was filled with Indian-style snacks (including mushrooms with curry, mmm!); after the H.R. Giger day, Kinoteka was decorated with crushed ice fog (à la Debbie Harry’s „Now I Know You Know“) and sangria; before the midnight screening of „I Spit On Your Grave“, encouragement in the form of whiskey shots was served at the entrance. 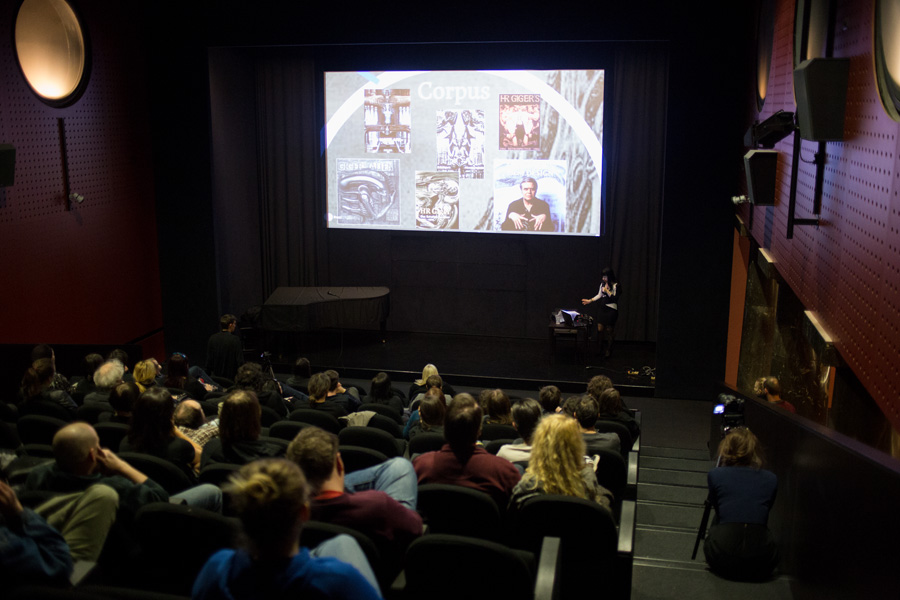 As for my lecture, I was incredibly happy and honoured to have so many people in the audience, considering that it was mostly from an academic point of view and that it wasn’t so interactive. After the lecture, I had many visitors coming to me and complimenting me for the insight into the visual metaphors and metonymies in Giger’s art (including a colleague who is doing a Master’s thesis in linguistics at the moment), and I even had a pleasant conversation with students (I believe from performing arts, who were doing a workshop in film criticism) and their professor, on the allure of Giger’s creations. 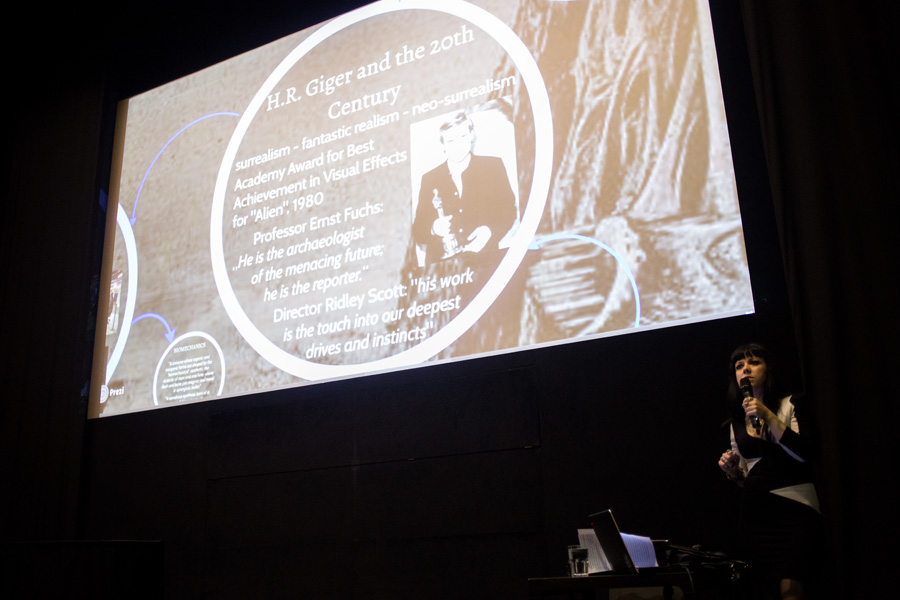 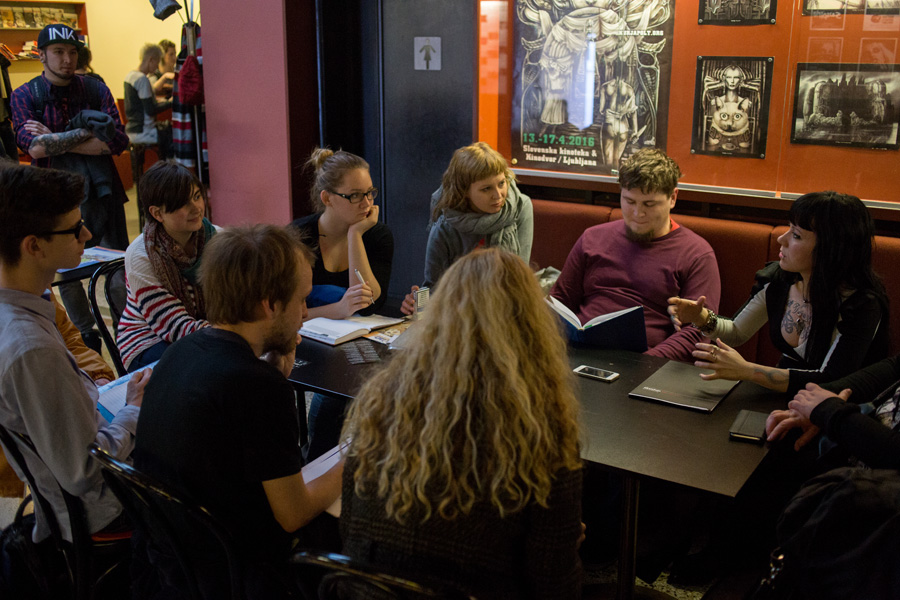 My dear friend Claudia was also there with me, making this a complete travel! We had such fun with this trailer (and kept quoting things like „Why haven’t you checked the children?“, or „Oh, really? Did she like it?“) throughout the festival and later as well:

My love for „Suspiria“ was ignited again after finally seeing the film in all its glory on the silver screen (and the soundtrack is a masterpiece which I must own on vinyl too), and we discovered some gems like „La Morte Vivante“ and the original „When A Stranger Calls“.
Kurja Polt Genre Film Festival is a horror film fan’s dream come true, and next year this fantastic event will probably see me as a visitor. Ljubljana is a lovely city, filled with vegan restaurants and friendly people, that I simply cannot wait for April 2017 to come and to see what Maša & Co. have in store for the next edition.
Thank you, Kurja Polt! 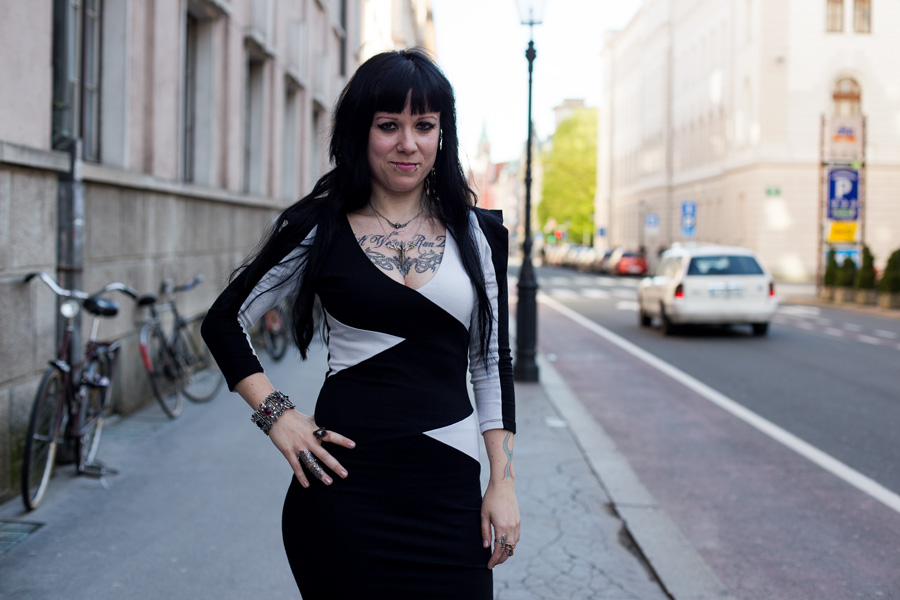 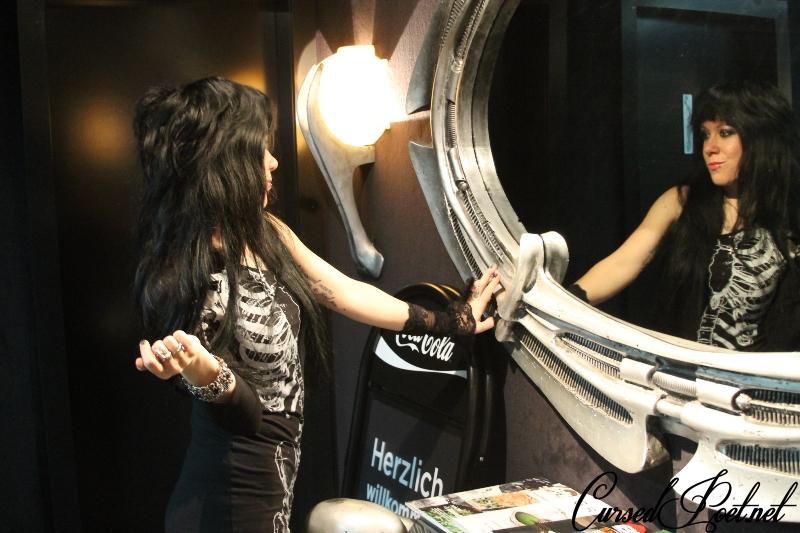 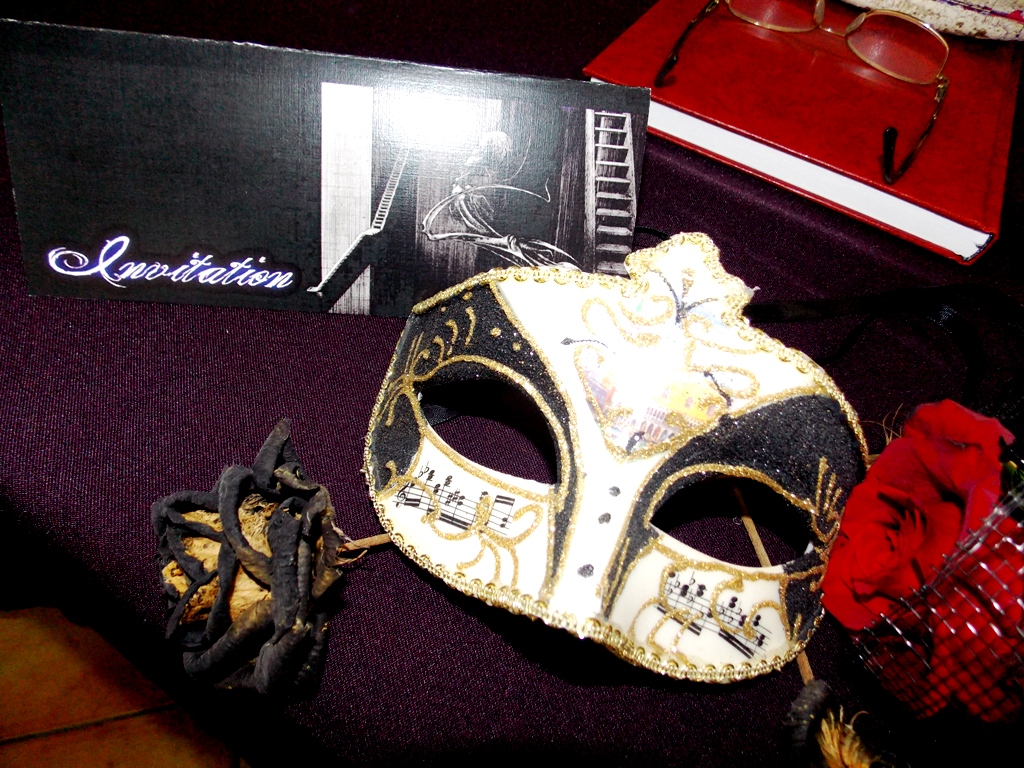 /Impressions taken from the promotion of “Memento Amores”/
“A Night Of Poetry“, which was the official title of the promotion, was a delightful way to name the special premiere of my second poetry collection “Memento Amores“, and everyone who attended, hopefully, has satisfied their poetic appetites. The promotion happened on October 30th, 2014 (Devil’s Night, of course) at 19h, in the cozy atmosphere of American Corner in Bihać, Bosnia and Herzegovina (in the building of the Cantonal and University Library). Attendees: my students, colleagues, poetry lovers from Bihać, friends and family.

For this book I wanted a real journey to the past – hence the record player you see on some of the photos below – we opened the night with a nod to the 80’s (Sisters of Mercy and The Cult), and the promotion itself was accompanied by a plethora of melancholic visuals on screen and the wonderfully eerie melodies of the “Bram Stoker’s Dracula” OST, which is my favourite film soundtrack ever. The closing ceremony was King’s (a lil’ bit of “Jailhouse Rock” and “Love Me Tender” for all the Elvis Presley fans out there)!
And now – to the night itself. I had the great honour and pleasure to have all my three reviewers there for the premiere – my dearest buddy Nizama Muhamedagić and Aurelija Karajić both talked about their unique visions of the book, while Fikreta Muslić gave her passionate impressions in Bosnian. My dear students Arnela Raković, Senita Jusić and Alija Mujanović read the selected poems with their wonderful voices (“Primavera“, “Silence Of A Lover“, “Remembrance Of A Kiss“…), and I cannot describe how proud I felt listening to them and seeing how much this night meant to them too. 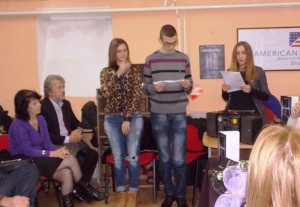 The night of poetry was further enriched by the siren’s voice of Nermina Imerovska, who lead us all through the journey of past loves and whose words we will remember for years to come… Lastly, it was my turn to say a few words to my audience, and I hope that I haven’t forgotten anybody in my thank-yous – if I have, please forgive me. The surreal feeling of the entire night was at the same time enchanting and utterly out of this world, and I only wish that my verses somehow arrived at the gates of Heaven where H.R. Giger now resides, like small gifts carried by the autumn wind. 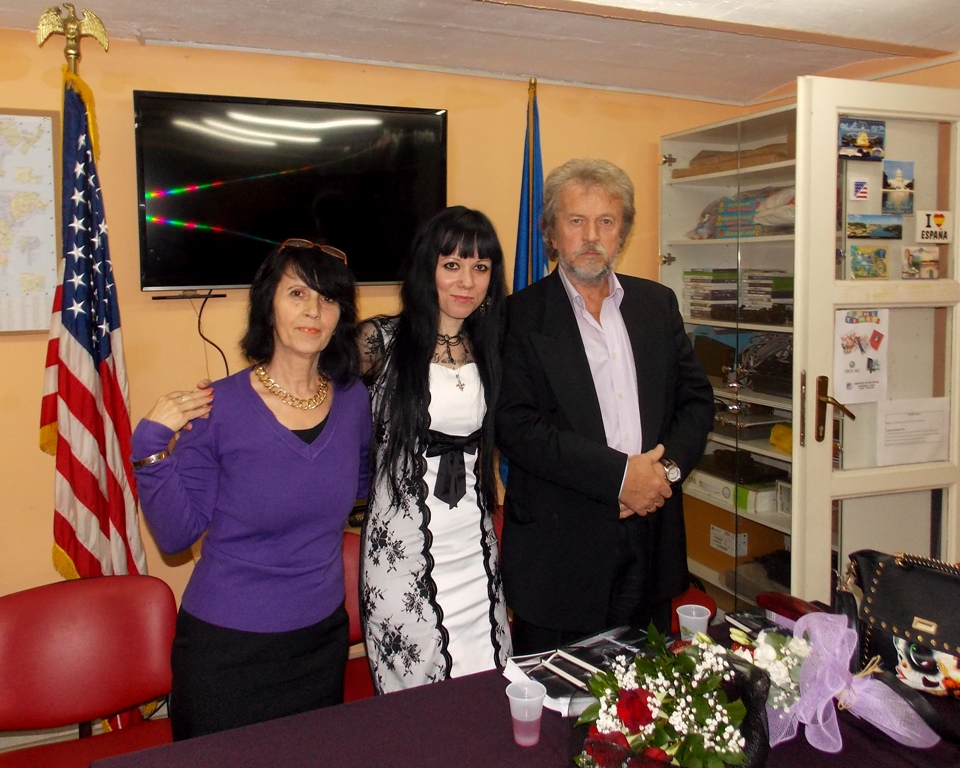 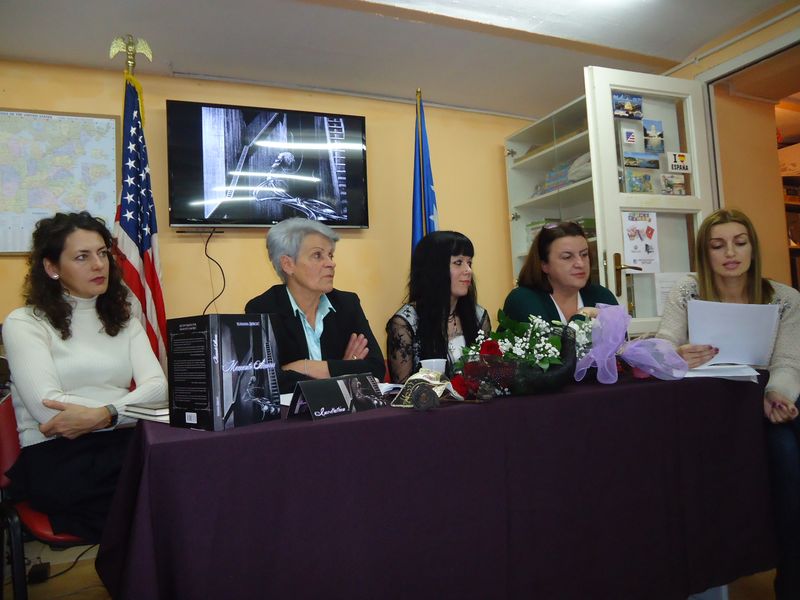 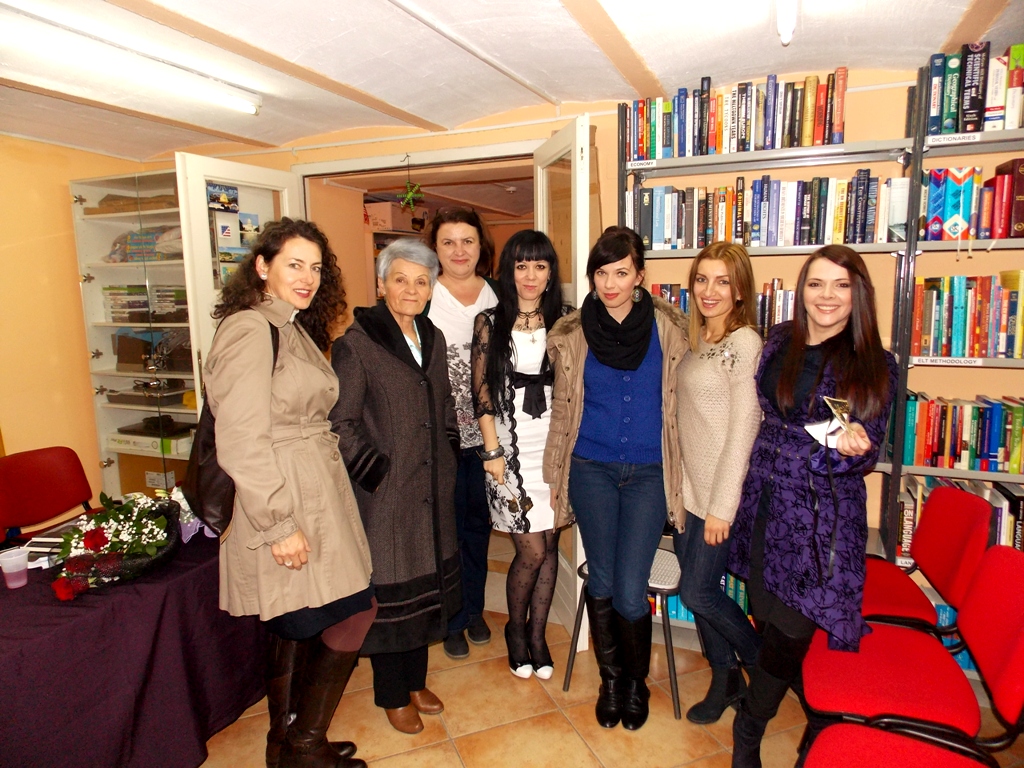 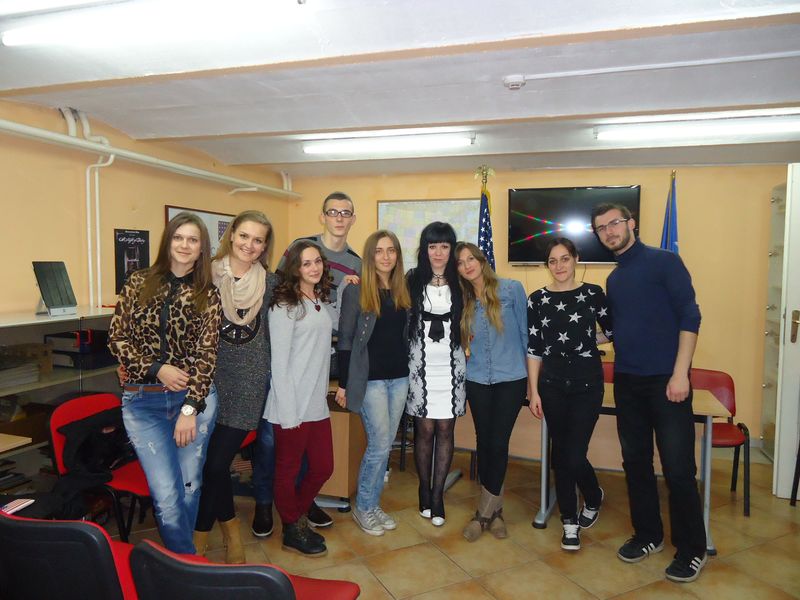 Speaking of gifts – I got pleasantly surprised by my family, friends and colleagues with a bunch of bouquets (in all my colours) and presents! I don’t think I could ever thank them all for everything they’ve given me, but here’s a shot: I wish to thank my mom Hajrija and my uncle Hajrudin (also a prolific author) for supporting me in all my academic and artistic endeavours, to Mr. Leslie Barany, Giger’s agent, Mr. Tom Gabriel Fischer and Mr. Matthias Belz for the incredible gift of “Shaft No. 7” on the cover, to Ljiljana Krupić, professor of Latin, for the green light on the title, to my dad Muhamed and my sister Sarah for sharing this evening with me, to my dear friends Nizama, Nermina (and the Book Promotion Society “Liber“, which she currently runs), Aurelija, Fikreta, Rialda, Veldina (who is also a poetess, as well as Fikreta), my dear colleagues Jasmina Tevšić, Alma Žerić, Alma Huskić, Dragana Šenda, Mersina Šehić, to the dean of the Pedagogical Faculty Nijaz Skender, to my dear Mirela Midžić for giving us the perfect venue and full support, to the Head of the Cantonal and University Library Ratko Knežević, to RTVUSK, 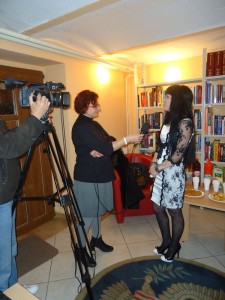 and last but not least, to my nightingales Arnela, Alija and Senita, as well as all my students (past and present) and everyone there who came to listen to my poetry and hopefully, were uplifted by the aesthetic aspirations written down for my muse far, far away…
As mentioned, below you can see the full gallery, as well as links to an article & TV piece about the night (for the video, scroll down to “DNEVNIK 31.10.2014.” – the piece starts at 29′). There will also be an extended article tonight at 21h in the show “Kultura” on the same channel – tune in if you have it!
More info on the official release date of the book (both the regular and deluxe edition) + Amazon links soon! 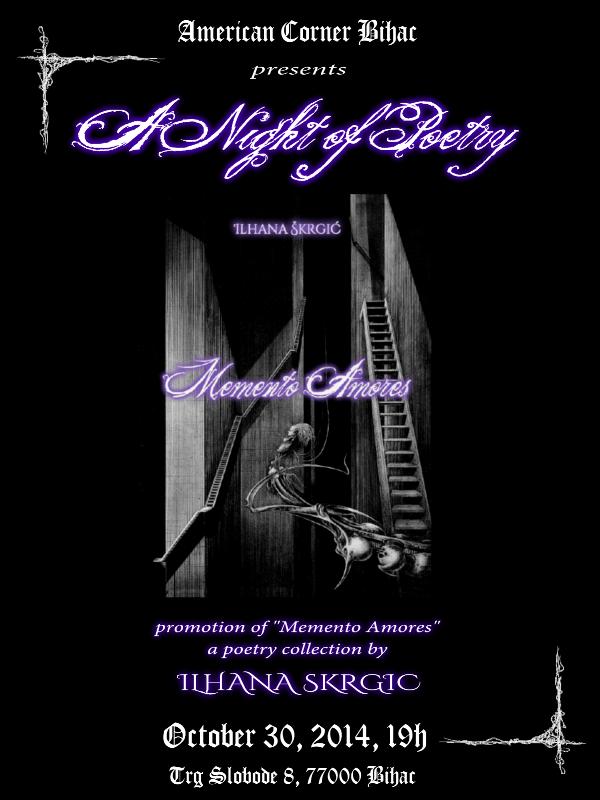 60-80 billion land animals and trillions of sea life tortured + murdered annually just for a sandwich. Over 80% of the world's farmable land is reserved for animal ag. Livestock eat 20x a human to get to snackable weight+water,waste,land. "But crop deaths tho..." https://twitter.com/MINKULTIMATE84/status/1576589103562641410

@Eurecch @leososamusica @Gabriele_Corno There's always that one that does it its what vegans do lol they got tonuse others peoples experiences to voice their crap. But we don't listen for they kill more creatures a year than normal slaughter does.