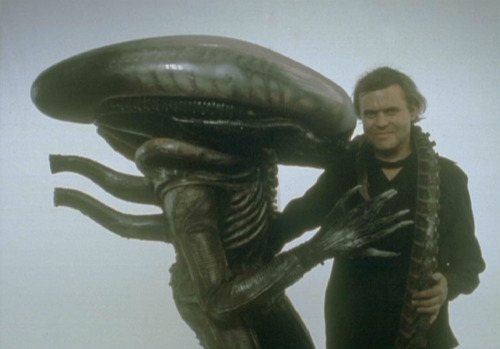 Rarely has one such luck as to be living in the same time period as one’s favourite artist. In my case, it is the Swiss surrealist painter and designer H.R. Giger, known around the world as the man behind the iconic design of Alien, a perfect monster gracing the silver screen since the late 70’s. The original movie, helmed by Ridley Scott, that successfully combined horror and science fiction and spawned a series of sequels, prequels and various DNA strains in the form of the recent Prometheus (2012, also Scott’s work, prime one at that), presented this truly magnificent creature and awarded its creators (Giger and four others, including the late wizard of the screen Carlo Rambaldi) with an Academy Award for Best Visual Effects. And rightly so.

Alien might be the work of art that introduced Giger to the masses, but it is also far from being the only marvelous creation this artist has unleashed unto this world. Giger’s work transcends decades, countries, themes, art forms, you name it, and an adequate portion of it is located in the heart of Giger’s native Switzerland. A quaint town called Gruyères in the region of Fribourg hosts the famous H.R. Giger museum and bar, respectively. For years I have wanted to visit this place and enjoy Giger’s paintings and sculptures that have grown to almost mythical proportions in my mind by the time I actually started my long trip to the home of my visions. When I finally got to Gruyères, no amount of printed photos and information could have prepared me for what I was about to see. if it weren’t for the photographs I took of the bar and the museum entrance (no photographs are allowed inside), I would have thought I dreamt the whole visit by now.

The H.R. Giger museum is located at the Château St. Germain, residing on a small hill in Gruyères. The entrance is decorated with his monumental „Birth Machine“, carved in metal and simply breathtaking, guarded from above by the „Guardian Angel“, while the „Species“ sculptures are placed on both sides. Though that’s not all – a small guard rail is placed on the right side, representing the characteristic Alien tail, while one of the Birth Machine babies stands above it. 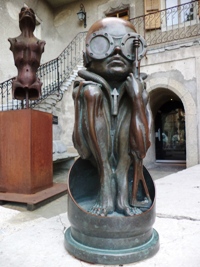 But nothing comes close to what treasures lurk from inside. After taking the ticket and placing the bag in a locker at the start of the museum, one is immediately taken by the first image – and it’s none other than my favourite of the „Schacht“ collection, No. 7! The Poetenz poster leads us upstairs and lo and behold – an Alien above us! A life-size Alien. Above. Us. I resist a sudden urge to faint right then and there and go to explore the chamber obviously devoted to none other than the famous monster and various designs accompanying it – the „Wreck“, the „Facehugger“ versions, the „Space Jockey“ sculpture! I’m home! Oh, but there is so much more to see and feel in this satisfying, sensual darkness… and quite impossible to capture it all in one take, which is why I visited the museum twice. Four Aliens lurk around the museum, along with the sculptures from another well-known sci-fi film „Species“. The Harkonnen chairs stand menacingly black against a large, almost wall-sized mirror, „Vlad Tepes“, „Giger’s Necronomicon“, the object from the 1967 film „Heimkiller“, which features a sand clock capturing a (bloody) head, is carefully hidden inside a special chamber in red, which offers visions not suitable for children (yes, including the infamous „Landscape XX“, also serving as an album cover for the Dead Kennedys, back in the day), and images of Li’s serene face haunt the premises 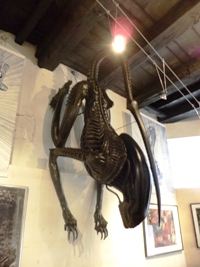 (and my mind, even now). On the second floor, a short excerpt from the DVD „H.R. Giger Revealed“ projection is available for museum visitors, along with many more engulfing visions, all masterfully created by Giger, as well as his Oscar in a special glass wall place. The upper floor offers a unique visions of artists to whom Giger himself has taken a fancy to and another room with sketches, drawings and one more Alien, this one very… available for touching! The details on its body are astonishing, down to the nails on his fingers. As we exit the museum area, we are greeted by a small souvenir shop that also features the Korn microphone stand and still more images and designs. We stock up on postcards, T-shirts, calendars and posters like every true tourist and find another chamber right next to the shop, that features the black wall Alien that is seen in front of the museum entrance in pictures taken some years ago. What a beauty!

I don’t have time to swim in sadness for leaving this great museum, because the bar is right across! Featuring good ambient and lounge music (volume just enough to not interrupt a conversation) and a spectacular Giger design, we are yet again in awe at what is in front of us. The whole bar is in stone-like colours (as opposed to one in Chur which is decadently dressed in black), which makes all the pelvic bones and spines stand out in the ceiling and on the chairs. Even the floor is embroidered with a strange design, while the windows are perhaps the most beautiful piece of artistry ever bestowed upon a single opening in a human „cave“. The bar offers „Alien“ coffee and a „Facehugger“ shot, along with other ‘ordinary’ drinks, so we get right down to trying everything on the menu, coming to a conclusion that everything tastes better in this bar! 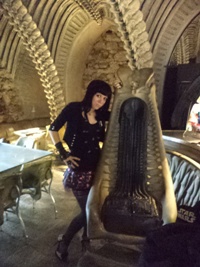 The staff is pleasant, the weather is nice, and I’m in a Giger bar – nothing more could an Alien gal like me ask for! Of course, while we are there, we make sure to visit another famous castle, this one truly at the top – Château de Gruyères offered a special exhibition of sculptures by a Zimbabwean artist Takawira Tuckson Muvezwa, along with standing exhibitions by other artists and historic documents, sculptures and other relics from centuries ago. In one of the above chambers, we find a Knight Room, a space filled with artistic representations of Gruyères (of course, one of Giger’s works is here too!) and a terrace with a spectacular view of all the surrounding mountains. Have I also mentioned that Gruyères has a Tibetan museum as well? All in all, with the picturesque tea-rooms, restaurants, wonderful nature and the smallest square I’ve ever seen, this town definitely has a thing or two to offer even to „normal“ visitors on any given day. To a Giger fan such as myself, it has become a place I want to visit for holidays, a possible (though highly-unlikely, given my penchant for rescuing cats and very complex criteria) wedding spot and a final resting place (if I could get on top of all the paperwork probably needed for that!) – here’s to you, Gruyères!

Author also wants to thank the kind staff at the HR Giger museum for a very special favour done for her, the equally kind staff of the Giger bar, Château de Gruyères, Joanna and Isra from La Fleur de Lys restaurant and, of course, her faithful companion, the wonderful Claudia Lang! Last but not least, a sea of gratitude goes to the one and only H.R. Giger.